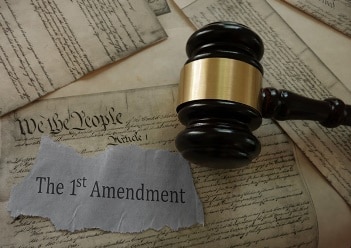 Our First Amendment practice is varied and multi-faceted. If you have a concern with a First Amendment issue, please contact us for more information regarding our services.

Below are some commonly-asked questions about the First Amendment.

What is the First Amendment?

The full text of the First Amendment, from the United States Constitution, Bill of Rights, is as follows:
Congress shall make no law respecting an establishment of religion, or prohibiting the free exercise thereof; or abridging the freedom of speech, or of the press, or the right of the people peaceably to assemble, and to petition the Government for a redress of grievances.

The “First“ Amendment was the “Third Amendment“ to the original draft Constitution, but the first two amendments were not adopted, thus creating our bedrock “First Amendment“ to the U.S. Constitution, and the beginning of the Bill of Rights. Essentially, the First Amendment guarantees a variety of civil liberties and restricts the government from interfering with freedom of speech, the free exercise of religion, the right to associate with each other, the right to privacy the freedom to assemble, the right to petition the government for a redress of f grievances, and further guarantees the separation of church and state. The courts have interpreted, and in some cases, limited, these freedoms in certain circumstances. For example, there is no mention of the right to privacy or the separation of church and state in the Bill of Rights, however, the Supr, eme Court has recognized the existence of these fundamental rights, as part of what was intended by the framers of the Constitution. Notably, the First Amendment only pertains to actions of the government; whether federal, state, or local. In other words, private corporations or individuals can – and often do – engage in activity that would otherwise violate First Amendment freedoms, without repercussion. For more information on “private censorship“ click here.

First Amendment Attorney on: Is all speech protected? 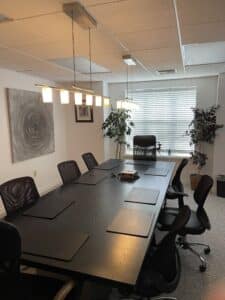 All speech – and expressive conduct – is presumed to be constitutionally protected unless it falls into one of the following categories: (a) defamation (false statements of fact published to third parties); (b) child pornography; (c) obscenity; (d) information damaging to national security interests; (e) true threats/fighting words; and, (f) incitement to violence.

The courts have concluded that the above-referenced categories of speech fall outside the ambit of constitutionally-protected expression, and therefore enjoy no First Amendment privileges. Certain other speech-related activities can also be restricted or criminalized, such as the advertising of illegal transactions, solicitation or conspiracy to commit crimes, and threats of bodily harm such as assault.

The government can restrict the time, place, and manner of certain speech so long as the restriction is supported by a legitimate governmental interest. Publication of speech owned by others can be restricted to protect intellectual property rights. The government can also speak, and its speech is not subject to a First Amendment analysis. 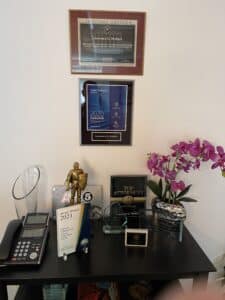 (a) The average person, applying contemporary community standards, would find that the material, taken as a whole, appeals to the prurient interest in sex, nudity, or excretion, (b) based on contemporary community standards, the material contains patently offensive representations or descriptions of nudity or sexual activities, and (c) taken as a whole, the material lack serious literary, artistic, political or scientific value.

Although this test is inherently vague, it has survived numerous constitutional challenges spanning four decades and remains the applicable legal test even today. The advent of the Internet has resulted in questions about the continued viability of the “community standards” element of the Miller Test, given the difficulty of website publishers to block local geographic jurisdictions from receipt of materials placed online. See Mr. Walters’ law review article, here.  At least one federal appellate court, for the Ninth Circuit, has ruled that Internet material must be judged by “national standards” as opposed to those of the local, geographic community. However, other courts still apply local community standards to the obscenity analysis. The geographic scope of this ‘local’ community can vary from a county, a tri-county area, a judicial circuit, or an entire state. The judge presiding over the obscenity prosecution decides what the scope of the community will be in that particular case.

While it is illegal to sell, transport, or distribute obscenity, it is not illegal to possess obscene materials in one’s own home, under the right of privacy derived from the First Amendment.

Indecent speech, while legal, can be subjected to age restrictions for purchase or viewing. Many attempts to restrict indecent speech on the Internet have failed, due to First Amendment concerns and conflict with the ‘dormant commerce clause of the U.S. Constitution. However, state laws imposing age restrictions on access to sexually explicit magazines, videotapes, and DVDs, have been upheld, and are routinely enforced.

Can my employer fire me for things I say at work, or in my off time?

The First Amendment applies only to government employers, not to private employers. For example, teachers at public schools enjoy First Amendment rights regarding their employment activity, while teachers at private schools do not. Government employers are prohibited from terminating employees as a result of their speech on matters of public concern unless the speech interferes with their job efficiency. Speech relating to matters that do not fall within the definition of ‘public concern‘ may be used as a basis to terminate employees, even if the speech occurs in the employee‘s free time.

We are often asked this question by potential clients who have had their online messages or postings removed by forums, message boards, or social media sites. However, as noted above, the First Amendment only applies to government actors, and not to private website operators. Therefore, assuming the website platform is acting on its own, and not at the request or on the behalf of some state or federal government authority, no First Amendment right is violated. A customer’s relationship with a website is usually governed by a set of “Terms and Conditions” that are agreed to during the registration or access process. These Terms and Conditions often identify the grounds for removal of communications or termination of the customer’s account. Such user Terms and Conditions typically provide wide discretion for the website operator and are usually enforced by the courts. If you have questions about website censoring contact a First Amendment Attorney here Walters Law Group today!

Is anything being done about the ability of children to access adult materials online?

Our law firm has been active in protecting children from exposure to inappropriate online materials in a variety of ways. Our managing partner, Lawrence G. Walters, Esq., has developed and patented an online age verification device, the BirthDateVerifier™ (www.BirthDateVerifier.com), which helps website operators identify the age of their customers before providing access to age-sensitive materials. We also represent, on a pro bono basis, the Association of Sites Advocating Child Protection (www.ASACP.org), which fights child pornography and offers a label to identify adult material online. Mr. Walters has earned the Annual Service Recognition Award from ASACP for his efforts in helping protect children from exposure to age-restricted material. If you have questions about this topic contact a First Amendment Attorney here Walters Law Group today!

Does the First Amendment protect advertising?

Yes, “commercial speech” is protected by the First Amendment, although the government is given greater leeway in restricting such speech if it can demonstrate a substantial governmental interest in doing so. Regulation of commercial speech is governed by the Central Hudson Test, which is used to evaluate whether a restriction on speech comports with the First Amendment. A substantial discussion of the Central Hudson Test, about gambling advertising, can be found in our firm’s article, here. Although commercial speech is not treated the same as political speech or other expressive activities, it enjoys a high level of protection from unreasonable governmental efforts to censor advertising based on the content of the speech. If you have questions about protecting advertising contact a First Amendment Attorney here Walters Law Group today!

No, there is no “hate speech” exception to the First Amendment. While certain crimes can be punished more harshly if hate toward certain groups is a motivating factor in committing the offense, the government cannot legally ban speech that is hateful, racist, or vile. Many large online platform providers will censor speech they believe to be hateful or offensive. However, private companies can make their own decisions on the moderation of third-party content without violating the First Amendment. If you have questions about hate speech contact a First Amendment Attorney here Walters Law Group today!

What is the 1st Amendment?

The First Amendment guarantees freedoms concerning religion, expression, assembly, and the right to petition. It forbids the government from censoring speech, restricting the press, and endorsing or prohibiting religion.

What is a First Amendment example?

The five freedoms it protects are: speech, religion, press, assembly, and the right to petition the government. Together, these five guaranteed freedoms make the people of the United States of America the freest in the world.

What is a violation of the First Amendment?

Can I sue social media sites or other private companies for violating the First Amendment?

No. The First Amendment only restricts government censorship. Private companies are not bound by the constitution. Social media sites, hosts, and online platforms are generally immune from liability for actions they take to remove user content or terminate user accounts, under federal law.